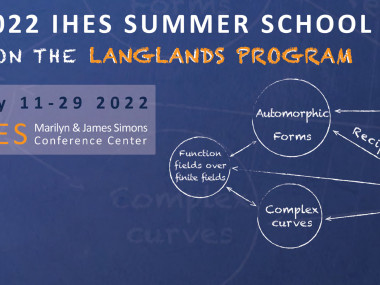 It has been almost 45 years since the influential summer school held in Corvallis, Oregon in 1977 brought together the leading experts of the Langlands program and defined the research agenda in this area for subsequent decades, at the same time inspiring and enabling several generations of young researchers to join in this exciting journey. This 3-week IHES summer school aims to do the same for the next phase of development in the Langlands program.

Recent decades have brought tremendous progress on the project of endoscopy, the extension of the Langlands program to the “relative” setting of spherical varieties and other related spaces, numerous successful “explicit” methods (such as the theta correspondence) to construct functoriality, novel ideas “beyond endoscopy”, and arithmetic applications of both the theta correspondence and the relative trace formula to the study of special cycles and their generating series. Ideas from the geometric Langlands program have begun impacting and enriching the classical Langlands program in significant ways. In particular, the idea that the “space of Langlands parameters” is not just a set, but a (putative) geometric space, can be used to organize a lot of developments around reciprocity, including the Taylor–Wiles method, derived structures, the Langlands correspondence over function fields, and the geometrization of the local Langlands conjecture.

The summer school will attempt to bring these exciting new directions together and explore their interactions.