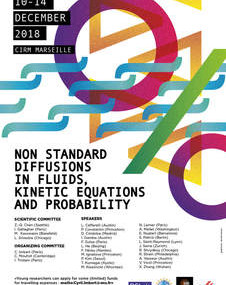 This conference aims at bringing together experts from different subjects in mathematics that share the common theme of nonlocal diffusions, building bridges between these communities and fostering collaboration.

From the probabilistic point of view, standard diffusions refer to the Brownian motion or more generally to diffusion processes (that is, Markov processes with continuous paths). The study of Markov processes with discontinuities leads to anomalous / non-standard diffusions. From the partial differential point of view, they correspond to integro-differential operators. The most classical example is the fractional Laplacian. This is an area of research that has been extremely active in the last ten years. The field is expanding. Its applications are reaching other subjects, including fluids and kinetic equations. ​ ​As far as fluids are concerned, the study of the surface quasi-geostrophic equation with fractional diffusion for instance raised a lot of interest in recent years. Another example of an equation from fluids where nonlocal diffusion appears naturally is the Muskat problem, which models the motion of the interface between two fluids of different densities. As far as kinetic equations are concerned, the Boltzmann equation is intrinsically an integro-differential equation. It is only very recently that techniques from the elliptic regularity were successfully applied to this very important equation.