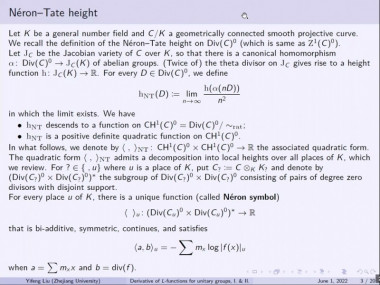 In this lecture series, we will focus on the recent advance on the Beilinson-Bloch conjecture for unitary Shimura varieties, more precisely, a Gross-Zagier type formula for automorphic forms on unitary groups of higher ranks. We will start from the general theory of height pairings between cycles on varieties over number fields. Then we will introduce the doubling method, a powerful tool in the theory of automorphic forms for studying L-functions for classical groups, in particular, unitary groups. Finally, we will combine the automorphic side and the arithmetic side to outline the proof of a formula relating the central derivative of L-function and the height of special cycles on Shimura varieties.