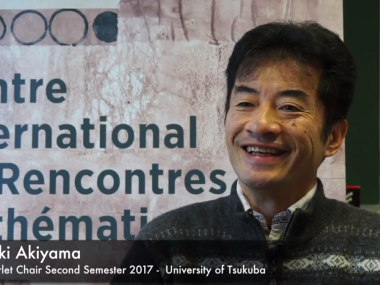 The main purpose of this project is to study self-inducing systems and their generalizations from many different point of views and to increase research interactions among discrete geometry, number theory, fractal geometry, theoretical computer science and dynamical systems. The basic examples, substitution dynamical systems, are symbolic codings of self-inducing system with bounded return time, with long history.

Poincaré's recurrence theorem tells us that, for a measure-preserving dynamical system in a given probability space, almost every orbit starting in a set of positive measure returns to the set. The induced system is defined by the first return map to this set. A self-inducing system is a system which is conjugate to its induced system. Such a system appears often as periodic points in many number theoretical algorithms, like continued fraction, interval exchange transforms, beta expansion and piecewise isometries. Once a self-inducing structure is found we may give precise description of the orbits, and deduce fruitful number theoretical results; symbolic dynamics can be very useful for this purpose. A very natural generalization of self induced systems consists in a family of dynamical systems such that, for any system in the family, the induced system is again is the family; this leads to the notion of S-adic systems, where the initial system is defined by an infinite sequence of inductions (the self induced case corresponds to a constant sequence). Self-affine tiling dynamical systems generalize substitutive dynamical systems to higher dimension. They encode self-inducing structure in general dynamical system and work as nice models of systems having additive and multiplicative actions at the same time. They also gives a mathematical model of quasi-crystals which exists as real materials.

The almost periodicity of the tiling is equivalent to the pure discreteness of the associated tiling dynamical system. The central problem in this area is whether a 1-dimensional tiling dynamical system generated by an irreducible Pisot substitution is almost periodic. Further many researchers are interested in to what extent the conjecture could be generalized. This problem has potential applications in quasicrystals, number theory, discrete geometry.

In this project, we study self-inducing structures from theoretical side in the conference ‘Tilings and recurrence’ and from algorithm side in ‘Zero entropy systems’. These topics fit very well with local mathematicians in Marseille as well as many leading international experts who will be invited to participate.