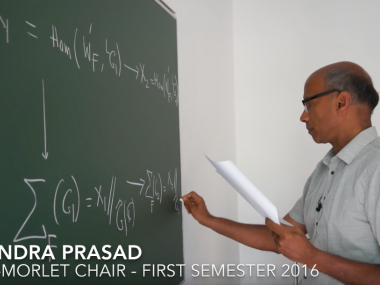 The Jean-Morlet Chair is a scientific programme that was created at CIRM in 2013. Friends and colleagues of the late Jean Morlet, a French geophysicist who pioneered work in the field of wavelet analysis, were looking for a way to celebrate his work. Morlet had worked with Alex Grosssman to develop what is now known as the wavelet transform and they had met on several occasions in Luminy, along with several other colleagues. Originally, people thought to name a house after Jean Morlet in the ground of CIRM-Luminy and dedicate it to hosting visiting mathematicians and physicists. In 2012, under Director Patrick Foulon, the decision was made to extend this and and create a new scientific programme that would be an exciting opportunity to boost the international attractiveness of the Marseille Region and develop pioneering work in all fields of mathematical sciences. The Jean-Morlet Chair was born!